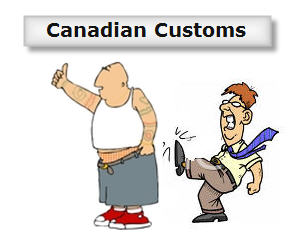 After 6 hours of waiting, questions, and more waiting I was denied admission and gently escorted out of the country. For one brief moment I felt like a loser. I had gone back in time some 29 years to a place and emotions I thought I would never have to experience again. For that moment all the joy, excitement, and success I had felt about my talk at the IDEA event and how it changed lives just two days earlier had evaporated into an old belief that I wasn’t good enough and would never amount to anything. While I was being questioned I could feel my body tighten, blood pressure elevate, and pulse quicken. I could also feel myself begin to shrink‚Ä¶I felt small.

Have you ever had one of those up and down weeks? You know‚Ä¶ one day you’re up and really excited about what’s going on and the next day you feel like you’ve been kicked in the crotch.¬† Sure you have ‚Äìwe all have.

Just yesterday I was on a plane from Vegas to Vancouver, celebrating a big victory. I had my computer in my lap, and was getting ready to share with you my very exciting experience at the IDEA World Fitness Convention that week. More on that later. That was just about 36 hours ago. By the time I had got back to my computer my state had been radically altered. I had been on my way to Vancouver BC to co-teach a training course when I was stopped at the border. Yes‚Ä¶ STOPPED

The initial reason had to do with my visiting the country for the third time this year and the lack of a work permit. There is however a special prevision for speakers in the Canadian foreign Workers Manual that allows up to 5 days in the country for the purpose of speaking without having to have a work visa. And their even allowed to get paid based on offsetting their expenses. Well by the time had a chance to discuss that fact with the customs/immigration officers (who were as nice as could be) another issue had surfaced. Having Interpol access to anyone and everyone’s complete history and records there is nothing that can be hidden. Not that I have ever attempted to do so. In fact I keep it no secret that when I was in my late teens and early twenties I ran with some pretty questionable characters and may even have been one myself. Although I was never an official member I did ride with two notorious outlaw motorcycle clubs back in New York during the late 70s and early 80s. Run-ins with the law were a daily occurrence. Walking away from that seen with my life and without a felony record was nothing shy of a miracle. No record of it ever happening would be way too much to hope for. I knew someday it could come back to kick me in the short hairs. And sure enough yesterday it did.

As you can imagine as a biker I did my fair share of bar room brawling in those days. Sometimes I wound up on the receiving end‚Ä¶sometimes I was the one doing the giving. Well back in 1980 one of the receivers didn’t like the

outcome and I wound up being charged. As it turned out he was a career felon so the DA let me off with a minor misdemeanor which equates to a slap on the wrist and about 30 hours of community service. Well evidently the Canadian government has never been in a bar room scuffle and doesn’t look kindly on those kinds of things. I don’t blame them they have a nice country and they want to keep it that way. So was it the experience that shook momentarily? No! I have certainly been through a lot worse. Was it the fact that I wouldn’t have the opportunity to share what I have to offer with the participants in BC?

No‚Ä¶although it did upset and disappoint me a bit. What shook me for that one moment was how easily and quickly those old emotions and beliefs were able to resurface after so many years. It is truly amazing how the pushing of the right trigger can immediately send a electrical current through an entire neuro-pathway.It’s powerful reminder that to truly change your beliefs and experience it may take changing in your environment some. Because I was able to change my environment so many years ago I was also able to create an entirely new set of beliefs about myself and what was and wasn’t possible and ultimately create a new life.Let my experience give you pause. Think about when, where, and how your old neuro-pathways are being fired up. If you’re in a habitually negative, or disempowered state, or if you just feel small more often then you should it may be time for a change. On the other side of that coin‚Ä¶it’s our beliefs that shape our reality not our environment. Quite often however a change on the inside needs to be accompanied by a change on the outside and visa-versa to fully take hold. Because my new empowering beliefs and neuro-pathways have been so engrained over the past 20 years I was able to quickly change my state back to where I wanted to be and take the whole experience in stride. It did teach me one hell of a powerful lesson however.

Next time I go back to Canada I’m bringing the boys! (Joking, of course)