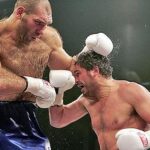 I’ve been quoted as saying “All achievement is based first on the strength of your WILL.” The strength of will I talk about of course is the WILL to start, the WILL to go on, to be more, and to achieve at the level of our potential and the Will to WIN.

We witness it more often than we would think‚ but we don’t always recognize it when it’s happening.

Last night I had the opportunity to see it in one of its most distilled and acute forms and I have to admit I was moved. Which is somewhat telling – in that, its purpose is to get us moving and keep us moving.

Last night I attended a FIGHT, several actually. More specifically I was at the Denver Athletic Club for the “St Paddy’s Day Punch Out” pro boxing matches‚ I know I know, not a very sexy name is it?

I’ve been to countless fights before I have also had the distinction of having been on both the teaching and “learning” end of more brawls than I care to remember.

But as I watched what I can only describe as a “Rocky” style epic battle I reflected on a lesson I learned years before which is, it isn’t always the opponent with the most skill, training, or conditioning that winds up on top, although those things are all critical factors.

It is the strength of WILL that may ultimately determine your outcome.

Two men standing toe to toe with one single goal between them, WIN. Only one can achieve this goal‚ but both must. It dawned on me, as I watched the nonstop exchange of blows, that for many of the fighters on the card this wasn’t just a fight‚ this was their life. Winning or not winning could mean the difference between paying the rent and being tossed out on the street, putting food on the table or going hungry, taking care of their family or the demoralizing affects of feeling like a failure.

Like those fighters, who’s WILL has been strengthened by need more than desire or want and through pushing themselves well outside their physical, mental and even emotional comfort zone almost daily; we all have more inside us than we know.

The fighter trains and prepares both body and mind but never really knows exactly what will show up in the ring when he or she suddenly realizes they’re in a war. Will they quit, just hold on, or fight to the death if necessary?

It’s like that in many of our own lives. We’re unofficially in training every day via our personal struggles but we can only guess, hope or speculate that when we are challenged to do battle beyond our conditioning or preparation that what will show up WILL be what we need to show up. That we will have the inner strength and WILL to not quit, to push beyond what we t believe are our limits and go the distance. 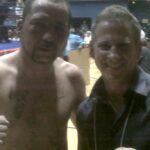 There was one particular fight last night that from the very onset appeared to be unevenly matched. As one opponent imposed his WILL on the other it began to look as if the lesser opponent should simply throw in the towel and cut his losses before they cut him. Instead he fought on – and at one point it was apparent, at least from a fellow warrior’s eyes, that he had already defeated his number one adversary the very thought of quitting. As a result everyone in the audience was on their feet and cheering for the underdog even though they knew he wasn’t going to win. We were inspired.

He finished the match and was able to walk away with his head held high, bloody but high.

How will you show up? No one was born a winner or a loser just a chooser. You get to choose how you show up… if your WILL is strong enough.