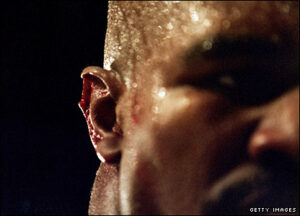 When you train your whole life to become THE BEST you are bound to run into opposition.

That opposition can take many forms.

It can show up as an ill timed injury, bad coaching, a losing strategy, or even some of your own limiting beliefs. But many times that opposition has a name and a face.

It’s that one athlete or group of players standing on the other side of the field planning to run your ass over and keep you from your objective.

How would you define that opponent for you?

In the Art of War, Sun Tzu wrote –“Know thy self, know thy enemy.”

If you think like a warrior, which we all imagine ourselves being when it comes to pushing the steel and ignoring the pain… your opponent would indeed be the enemy.

In large part, he’s what feeds the passion you bring to your workouts… what drives your anger and pushes you to do what you do?

He’s that face changing thing that you must destroy at all costs?

Yet – it’s also been written that – “Your primary objective is to strengthen yourself, not to destroy your opponent.”

Why do we feel it necessary to destroy or completely obliterate the opposition?

Our goal as athletes is to get bigger, faster, and stronger – in essence all our efforts are geared towards growth, refinement and mastery. And yet we want only to breakdown, destroy or – eliminate our most worthy advisories.

“I must break you”  -Ivan Drago

We show them little respect, treat them with disdain and contempt and belittle them behind their back.

And we grossly underestimate them on the field of battle (which a sure fire strategy for defeat).

These opposing forces cannot occupy the same space at the same time… one will always cancel out the other.

Darkness cannot exist where there is light – and the opposite is also true.

In the world of competition the opposition will always be there.

There’s one other given. The greater the opposition – the more immovable the object standing between us and victory the greater our own efforts must be if we are going to be victorious.

The better they are, the better we must become

That opposition doesn’t have be to the enemy, however.

Our own growth and ability to excel does not depend on their destruction. In fact we benefit more from their survival.

When we have the courage to show our competition the respect they deserve we can turn them into our greatest ally.

When acknowledged for their own greatness and respected for their achievements our opponents can unwittingly provide us the motivation to push harder, go beyond our own self imposed limits and rise above what we thought we could ever be.

Without Apollo Creed would there have been a Rocky?

Without Larry Bird would Magic Johnson have been as great?

Would Hulk Hogan have been elevated to super star status without the legendary André the Giant standing in his way?

What about, Mohammed Ali and Joe Frazier?

Without Tyson would Holyfield have two full ears today? (Maybe that’s not such a good example)

The reward for our efforts shouldn’t be some plastic trophy, a fleeting title or the annihilation of someone else’s magnificence – but rather the manifestation of our own magnificence.

So the next time you think about or look your opponent in the eyes… instead of underestimating or belittling them – elevate them, respect them, recognize them… even encourage them.

The better they become, the better you will become… if you have the courage to go blow for blow until the best opponent is left standing.