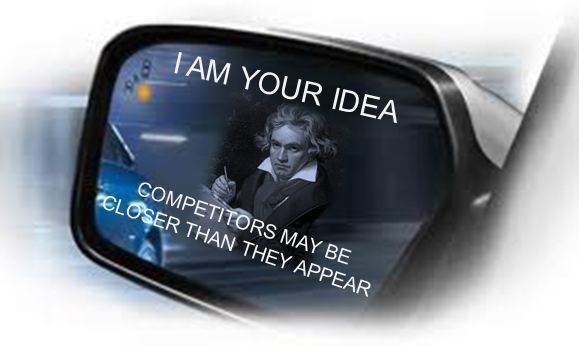 It’s been said that  “A good plan today is better than a great plan tomorrow.”

We’ve all had a good idea or two in our lifetime that with a “good “ plan may have very well turned into our fortune had we acted on that idea quick enough. Instead, we wait or hesitate or just shrugged it off as “yeah… that would be great.”

And then we forget all about it – until that fateful day when we see our idea on QVC,  on an infomercial or on the shelf at some “as seen on TV” store. Then we leap 10 feet out of our chair screaming – “THAT WAS MY IDEA!”

No it wasn’t your idea... it was the universe’s idea and it was presented to you for consideration and action- but you did nothing with it.  Your competitors did.

nto energy for the world to hear. But because he could not hear he was able to feel the energy first. And because in the process of manifestation it is our feelings (emotions)  not our thoughts that led to action he was able to almost immediately put what he “felt” to music and create -rather give birth to the masterpiece.

I know this sounds a bit esoteric (because it is) but every time we are presented with an idea (good idea or bad) and ignore it we deny that idea (energy) life… at least temporarily.

But here’s the thing – we can’t possibly know how many other people have also been presented with this very idea at the exact instant it was presented to us… making it a bit of a race to the starting line… actually the FINISH line.   Which is why waiting or hesitating to put a great idea into action may be the worst mistake you can make.

If no one (like you) takes that idea and runs with it -the energy will then go back into circulation until someone ultimately does.

Several years ago when I owned a number of fitness studios I had a great idea that we actually implemented in each one of the facilities. The idea was simply adjustable straps with handles on the end suspended from the ceiling so that we could do a variety of mock gymnastic exercises. Everyone loved it and we even “talked” about creating a prototype and marketing them to other facilities… but never did.  Three short years later the TRX Straps emerged on the market and have been a HUGE success since.

Recent notables who acted quickly on an idea that paid off:

Am I suggesting that ideas like “The ShamWow” and “The Clapper” were presented to someone form the universe?  I would have to say YES… but the truth is I don’t know!!!!  What I do know is that if you have an idea you can be rest assured that someone else has that very same idea right now and if neither one of you take action on it immediately I may be next in line… and I will.

One BIG missed opportunity is enough to teach me a million dollar lesson. How about you?

Please share your thoughts. I look forward to hearing from you.