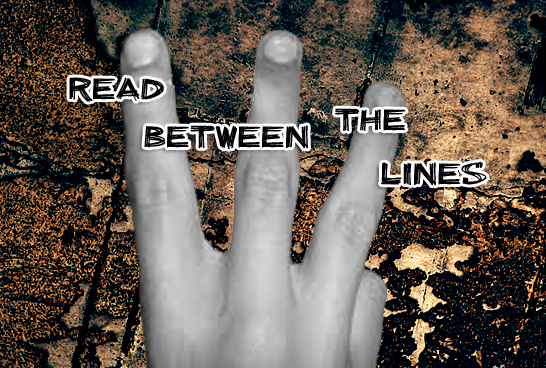 If you’re anything like me, there’s a lot you have to think about from minute to minute, day to day and week to week. It can be freaking overwhelming at times.  Other times it seems like we’re running on auto pilot.

Just the other day for example, I was headed to Colorado Springs from Denver and after arriving at my destination – I had vertically no recollection of driving or even what exit I took to get there. I had taken the drive so many times that it was programmed in.

It was as if I were in a trance the entire drive down except when some idiot in a semi cut me off doing 90mph.   Then somehow as if on its own with no conscious effort on my part, my finger popped up…. followed by a short all be it intense stream of obscenities flowing from my lips.

It was like a reflex or part of the natural fight or flight response – or what I now call the fight/flight/finger response.

Like walking, breathing or the pumping of blood to and from the heart much of that stuff that happens automatically without us ever thinking about it is the job of your unconscious mind.

Your unconscious (or subconscious) mind is responsible for almost 90% of your actual mental activity and most of it is happening below our conscious radar.

Imagine a massive iceberg for a moment… your conscious mind is represented by what you see on the surface which is approximately 10% of the mass. This is the realm we like to 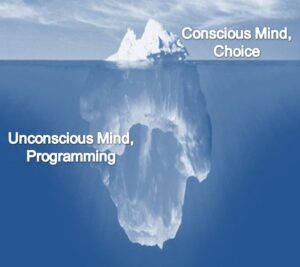 think of as CHOICE.

The vast majority of the iceberg like your unconscious mind is somewhat hidden below the surface. And whether you’re aware of it or not it has massive influence over the vast majority of your actions, decisions and the choices you make on a minute to minute day to day basis… like flicking the bone at a truck driver that could run your ass over without a second thought.

Logically that might not have been the best choice but the emotional part of the brain can often hijack logic and automatically trigger an otherwise foolish response.

Consciously you may have decided to get up and go to the gym this morning, or grab those two beers last night, what kind of shape you’re going to be in or even the amount of money you make. But what you’re likely not aware of is the influence your unconscious programming had on those decisions.

Like the blueprints and programming you created early on about how to walk, talk and all the little idiosyncrasies you have – you we’re also busy creating unconscious blueprints and programming for how much success, happiness, fitness and money you we’re going to have… as well as the way you response to stress or fear.  All based on some early experiences you had, and or the decisions or beliefs you created.

The very programs you likely created to help you safely navigate your environment at that time my now limit your options and choices and may have become the primary factors in limiting your ability to achieve what you want… providing you know what you want.

My goal was to get to Colorado Springs and back home again safely in one piece and yet my very reaction to the environment around me could have produced a decidedly different result.  In many respects it was a fear based reaction.

That reaction unless identified and re-programmed does and will continue to represent a restriction and limitation to the otherwise more empowering and appropriate choices available.

Maybe it’s time to start questioning some of your unconscious automatic responses to what’s been cutting you off or getting in your way. Maybe it’s time to scrap some of the old blueprints and start building a new set of plans for the type of choice you want to make consciously.